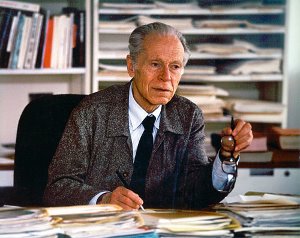 I was touched to learn that Albert Hirschman died on December 10th.  He warned us about unintended consequences of development actions,  for which I’m grateful.  He also taught us how three mechanisms – exit, voice and loyalty – relate directly to the role of democracy, markets and reciprocity  in the state, the economy and civil society.

People have most power when they can change or exit without serious danger or cost, as consumers, voters or supporters or citizens.  Exit is not always possible,  in which case strengthening  participative voice  is important.  In Hirschman’s third mechanism, states and agencies need to maintain the loyalty of their stakeholders based on belief in the value of what they do. Continued loyalty requires negotiation through voice backed up by the threat of exit.

I spoke yesterday with a Zimbabwean living in the United States about my enthusiasm  for engaging with young people in southern Africa and helping them gain the knowledge of their own strengths, rights and responsibilities in society through completing micro-actions clustered  into challenges.   He loved the simplicity of the structure, but was worried about unintended consequences.  He wasn’t calling it that,  and was struggling to articulate his concerns. I offered him Hirschman’s phrase  and he said “yes, exactly!”  Thank you,  Albert,  for making me look brighter than I am!

But why was my  Zimbabwean friend concerned about unintended consequences of teaching young people  to believe in their capacity to develop their own circumstances? Well, he was worried about their frustration when they learn what they could do but can’t do it because they do not have access to resources and the opportunities for exit, voice and loyalty. Thanks, again, Professor Hirschman, for giving us the words to understand the world.